Hi and welcome. With "music money", we try to answer the question. How to make money, and how we make money of our music.

Starting a career as a songwriter cost money..Your instrument, music promotion,and recording gear  will cost money..That's one thing that you have to keep in mind..Try to win back an amount of the cash you have spend is probably a task to achieve.. But also making a living in the music business is a goal that you may consider and try to achieve..

Although  a job into music industry ( A&R, Publisher....) isn't not that easy to find..It's worth trying..

Cause, to many songwriters are only concentrate on having a contract signed, and in the meanwhile having a job they absolutely don't like.

As I mentioned before, get signed isn't an easy task to overcome. As you now, it can take some time before you have that contract signed, so it would be nice to do something in the meanwhile that has a connection with music and gives you some satisfaction.

That's what making a living from music is all about. Isn't it so?

The reasons why it is so difficult to get signed, I have mentioned all about previous chapters of the music industry. 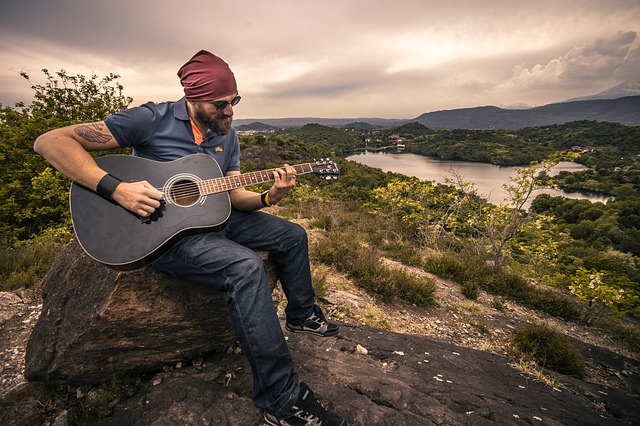 The photo above shows a guitarist who's a bit practising  before  performing in public..

Street musicians are a perfect example ..

Sometimes, in some cities, you need a performer licence..Just a small step to overcome, and a perfect step to make money, rehearsal, and learn to play music in front of a life public.. Enough reasons suppose to start do it yourself..

Indeed there are!Because it's money made by any action that is related directly or in-directly to music, there is an enormous choice in things you can do.

To give you some examples.

These are just a few examples of some music jobs. If you're not such a talented instrument player ( but enough to do a perfect songwriters job)or if you think that working in a recording studio isn't something you would like or would suite you.Then there are other roads that you can go to make yourself some music money with.

If you don't know that you have "business" talent, well,this is the time to find out. One thing clear, you can learn and anything you want if you really want to. So also , how to do business.

What is the advantage of starting a business. Suppose that you start your own web site(what is by the way a great idea), where you want to sell your CD and make some music money.

Suppose that you start your own web site(what is,by the way, a great idea), where you want to sell your CD and make some income.

If you have a lot of monthly downloads of your song, what you think the record labels and publishers will think? They will get interested why your music is selling. The ball is in your camp, and now you can decide to walk and start to make your money or not.All depends of how well your site will deliver, of course. And selling your Cd's on the net is only one option.

You can go for a career as a musician, guitarist, keyboard or playing whatever instrument player, in a band or for sessions in a recording studio, or on your own street , to start . Of course, your playing need to be perfect on stage , and not really perfect on the street. Just an other idea, and other road to make some 'honest'  money with music.


Thanks for your visit..Feel free to re-visit to follow the updates...